Download our latest and updated forms for your Registration and Consent.

We provide a warm and friendly environment where you are made to feel at ease.

View our latest pictures and Videos of Our Events and Services.

Indian oncologist known for his contributions to the field of Cancer. He is also the past President of Association of Radiation Oncologists of India & Chairman of Indian College of Radiation Oncology. He graduated in medicine (MBBS) from the Osmania Medical College, Hyderabad in 1982. His master’s degree was also obtained from the same institution in 1992. He also secured a DNB in Radiation Oncology National Board of Examinations, New Delhi.

He also served as a consultant ocular oncologist at the L.V. Prasad Eye Institute from 1998. In 2002, he was appointed as the director & senior consultant at Apollo Cancer Hospital, Hyderabad. In 2003 he founded CURE foundation for the poor so they could avail the best of cancer care.

An enthusiastic and motivated podiatrist with a strong interest in sports medicine, diabetic foot care and health education, Dr. Murshid Al-Kendi is a graduate of La Trobe University in Melbourne, Australia where he also took his Masters Degree. Because of his intelligence and perseverance, he was awarded a full scholarship to study podiatry by the Ministry of Higher Education – Oman.

Dr. Al-Kendi initially practiced his podiatry career in Australia and Oman and recently joined Health & Style Medical Centre LLC, Abu Dhabi. He is a member of various organizations such as Australian Podiatry Association and Golden Key Community. He is also registered with AHPRAH and Medicare.

Being a podiatrist, he is happy to treat all conditions and pathology of lower limbs.

He has a special interest is Biomechanics as he likes to play football and link his profession with his hobby.

Dr. Murshid, as he is commonly called by his colleagues, also believes that education and knowledge shared between health practitioners and patients are the key to help all patients to achieve their best health outcome.

Dr. Fathima Farsana joined Health and Style Medical Center in 2020 as a Dentist. She received her degree in Bachelor of Dental Surgery (BDS) at Rajiv Gandhi University, India in 2014.

With more than 4 years of experience and practice in India since 2013 in a Private Dental Clinic, Dr Fathima performed numerous cases and procedures.

Dr. Rahul Lath has more than 17 years of experience in the field of Neurosurgery. He has completed his fellowship from Adelaide, Australia.He is a life member of the Neurologicalsociety of India and also holds international membership at the Congress of Neurological surgeons (USA) and world society of stereotactic and functional neurosurgery. His area of expertise include pediatric Neurosurgery, Stereotactic functional neurosurgery, Radiosurgery & Brain tumors, Spinal surgery and microsurgery and Deep Brain Stimulation for parkinsonism and other movement related disorders.

Dr. Banan Khalafalla is our Medical Practioner at Health and Style Medical Center, Abu Dhabi. She obtained her Bachelor’s Degree in Medine and Surgery from the University of Gazira, Sudan, and has completed USMLE, Step 2 CK.

Dr. Banan has over 4 years of experience reputed center in UAE. She started her career in Sudan, where she was a General Practitioner for over 3 years. She also joined the Primary Health Care (PHC) researches in rural areas and villages and volunteered in the Diabetic Clinic in Sudan. 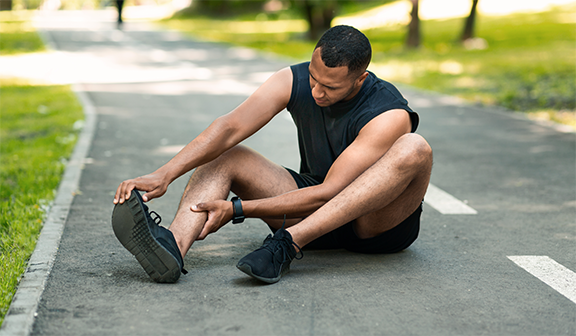 An ankle sprain is a common injury that occurs when one or more ligaments on your ankle are overstretched or twisted. Any awkward twists or turns may lead to abnormal joint stresses that may cause a sprain or ligament damage as severe as a tear. The ligaments that surround your ankle hold your bones together. […]

Flat Feet: Types, Symptoms, assessment and Treatment Flat feet is typically a painless condition or postural deformity in which the arches of your feet are flattening and completely in contact with the ground. What happens if you have Flat Feet? The arch of your foot helps to support your body weight and provides stability and […]

Bunion: Types, Symptoms, assessment, and Treatment A Bunion is a bony growth normally affecting the big joints of the feet. Genetic factors are being considered as the major cause of bunions.  However, there are some other factors such as types of shoes that you wear, activities, and other injuries that you had in the past […]